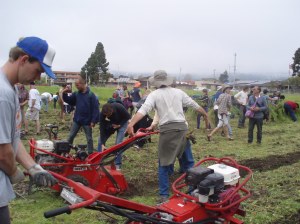 In my opinion, the Gill Tract takeover, hands down, was the most well-planned, well-executed, and worthwhile action that any segment of Occupy has taken in some time. At least any that I’ve heard of. The weekend prior I was invited to a planning meeting at the home of one of the organizers, attended by perhaps thirty to forty fellow comrades. Supposedly each member of this group was personally connected to at least one of the original organizers. We were all told to keep the action under wraps. This is polar opposite to the strategy taken for the January 28th Move-In Day, which was all about publicity, press releases and flyers. The prevailing wisdom in Occupy seems generally that if you know about it, chances are the cops do too, because, chances are, at least one of those you see around you at any given moment are one of them. At least in this case, the prevailing wisdom stands corrected.

The next Sunday we gathered at the Southern end of Ohlone Park for a pre-march rally, complete with speakers, music, and even a belly dancer (and of course, free food, a reliable constant at every Occupy event). A friend of mine told me that she’d heard a rumor that we were taking a UC Berkeley plot of land, and I assured her, that if this were the case, then I wouldn’t be staying. Only a select few of the core organizers knew our final destination, therefore the rest of us were putting a lot of faith into the strength of their choice. If it was a poor one, than there was a chance that we all could end up spending the weekend in Santa Rita.

The march got started at about one o’clock. And we didn’t head towards the UC. Instead we snaked West and North through residential streets of single-family homes. Comrades on bikes criss-crossed our flanks, helping to divert traffic and direct the march. People came out onto their porches and watched us from their windows. I didn’t see a single cop along the way. Not one.

And when we arrived at Gill Tract, which occupies a generally desolate stretch of San Pablo Avenue in Albany, near enough to the waterfront that you can almost smell saltwater in the air, there was a phalanx of pick-up trucks, flat beds, and 14’ semi’s waiting for us. Some protesters began handing out a thoughtful, well-written and well laid-out information sheet on the plot of land. After some people in the front line broke the fence, they took us in, and as soon as we entered into the tract itself, a vast expanse of shoulder-high weeds and forgotten planting projects, they put us to work. They’d developed a system of arm-bands, green for the gardeners, red for the carpenters, etc., so that we inexperienced urban farmers would know who to turn to for direction. Within an hours time, we’d cleared enough space to begin tilling the soil and setting in the seedlings and infant plant starts. The action was coordinated and methodical, in such stark contrast to the chaotic and ultimately disastrous Move-In Day on January 28th. If nothing else, this action demonstrates the good of a little unashamed leadership. 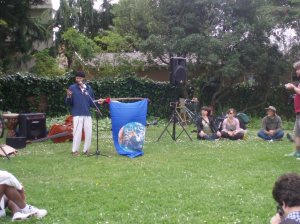 But of course, that isn’t all that this action demonstrates. If you ask me, this is exactly the direction that Occupy should be taking: that is, actions that are locally relevant, yet systemically significant. Think global, act local. Rather than attempting to manufacture interest in an arbitrarily chosen date (such as the upcoming May Day, which many of us seem more apprehensive about than anything else), we should set our efforts to the small, nearby, worthwhile fights. Identifying those places where the rage under the surface runs deepest, and is only waiting to find an outlet. The Gill Tract fits the bill. Urban farming is huge in the Bay Area. Development, well, that’s huge too, but in far more conflicted and divisive a fashion. The tract had been purchased by UC Berkeley (hence my friend’s relative misinformation), but it is pristine farmland, and over the years has been haphazardly employed for genetic research and small scale grow projects. The next slated project: a Whole Foods supermarket. So, in a word, in this case I believe that even your many average joes will have to agree that we Occupiers here have a pretty good point: the Gill Tract had sat pointlessly vacant for years, and yet in just a few short hours we had put it to productive use, transformed it absolutely, testament to the power of protest and positivity — the wonderful feats that “we the people” can accomplish when we get together and put our mind to it. The Wells Fargo action the other day seems to have been another general success. I wasn’t there, so I can’t speak to it personally, but this is welcome news indeed.

Me myself, I had begun to worry a little about our movement. Worried that we were losing direction, that we were pulling off message. The General Assemblies had become increasingly, consistently frustrating — little more than a churning mill for rally after un-related rally. The same faces every week, over and over. Occupy Oakland seemed to be losing the support and patience of the community — I never used to have to work so hard to defend this movement. Increasingly, people were wondering what we were doing, what we were trying to accomplish. I was beginning to wonder the same thing.  But perhaps this is just the direction that Occupy will have to take, where the regional offshoots, Occupy Oakland, Occupy San Francisco, become increasingly irrelevant to the autonomous actions that we can take from within the framework and networks that Occupy has established. After all, without the camps, there is little reason to feel tied down to any particular town or city, but as long as we all keep showing up, keep coming to the meetings, and keep trying, again and again, to support one another, than the possibilities will present themselves. We can go wherever the fight takes us.

So, what next? If I might put forth a modest proposal: more of the same. Well-researched, fully understood local issues with system-wide significance. More foreclosure defense. More bank protests. Perhaps a few of us could take it upon ourselves to learn more about the Goldman Sachs credit swap scam, whereby the city of Oakland has been trapped into paying one of the worst villains in the system millions of dollars a year through financial trickery. Perhaps we could identify a way to inform, and apply the public pressure. We could find out if other cities are facing the same problem. Or, perhaps we could start thinking about education. The teachers union could be an incredibly powerful ally, and with the advent of charter schools and school closures perhaps there’s something there that we could tap into. Perhaps, and this is just a suggestion, we could start thinking about Lakeview Elementary, one of five schools slated for closure at the end of this school year. I remember receiving “Save Lakeview” fliers and petitions long before Occupy started. What could we do with that? We’ve started a free farm. What about a free school? Is that idea outlandish? I wonder. Maybe it is. But perhaps it’s also worth thinking about.