Leave a comment
By antalpolony Essays, Personal and Otherwise, Occupy 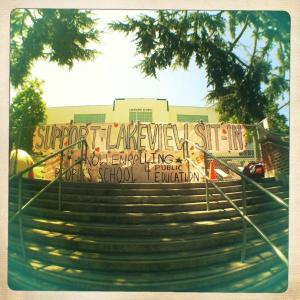 If this is to be one of the last of my Occupy hurrahs, as seems increasingly likely, at least on any kind of scale approaching grandeur, than it is a good one. The sit-in at Lakeview Elementary, one of four schools closed by the Oakland school board, is a perfect example of the impact Occupy has had on our local culture, the resilience of Oakland’s people and the merit of resistance, and, no matter how it turns out, it should be remembered as a prototype for what we should watch for in the years to come, the pockets of resistance that will spring up, which will need support. There might not be any such thing as an Occupy 2.0. At its best, there never really was such a thing as an Occupy 1.0. As soon as there became a “we”, rather than a “99%”, the way was lost. We can thank the repression of the government and the police forces, though we shouldn’t blame or hate them — they were only doing what they were supposed to do. Those of us who came together, and those of us who drift apart, should take to heart the lessons we learned. We should remember. It’s a good thing that so many of us were young. Our expertise will surely come in handy again, later in our lifetimes. This was an extremely important battle that we waged, and we never really did have a chance of winning, we all knew this.  When the time comes, we’ll still be here. And now we know that there are a lot of us, just waiting for something to happen.

Something like the Lakeview Sit-In. The People’s School for Public Education, staffed as it is by professional teachers, by parents, by enthusiastic volunteers, has been, in my opinion and from my perspective, an unqualified success. I’d been interested in the pending school closures as an issue for a while, because, in my rhetorical-political-Occupy mind, I thought of them as a perfect opportunity for a coincidental cross-section of labor, community, and Occupy-style protest. I’d remembered that the decision to close Lakeview Elementary’s had lead to flyering and speak-out campaigns months earlier. One of the multi-thousand person marches back in November had been organized around this issue. It had seemed such a strange and forgetful shock to remember that I hadn’t heard hardly anything about it since. While we were busy Fucking the Police (erm, for lack of a better term) and arguing about diversity of tactics, a real, painful and absolutely tangible injustice was playing out underneath our noses. How did we miss that?

Well, as it turns out, we didn’t. That is, if “we” were to include the full breadth indeed of the “99%,” and would therefore include the Occupy Oakland Education Committee, Occupy Education California, the Liberate Education folks, and Joel Velasquez, the Lakeview parent leading the charge at Lakeview Elementary. In the weeks prior to the sit-in, based on the OO Ed meetings I’d attended I was a bit dubious — I wasn’t sure that one parent would be enough. But, apparently, it was. Coupled with parents and students and like-minded teachers, that was all it took. Joel has been the forefront of the action, and he is a good one — good looking and well spoken, and when his kids take the mic they match these qualities with their sheer adorableness. Behind him are a few veteran left wing education figures such as Jack Gerson and Bob Mandel, and a few stunningly beautiful female teachers, including Feyi Ajayi-Dopemu. All of them have presence and charisma and deep knowledge of the issues both local and systemic. Underlining their arguments, literally right behind them on the steps of Lakeview, now draped in protest banners and alive with children and arts and crafts, is one of the most demonstrable failures of American society — the abandonment of public education, the gutting of urban school systems, the consistent and almost willful neglect of minority children. Concerning the Oakland school systems deep fiscal difficulties, the closure of the 5 schools (the 4 schools now, after Lazear’s application to become a privatized charter was accepted), seems just about one of the most clumsy and ham-handed solutions imaginable. At a dinner party a few weeks ago I actually got a chance to meet one of the school board members who voted for this closure, Jemoke Hodges. Ironically enough, her husband is a Lakeview alumnus. This was a source of tension between them — she became very defensive when I brought the issue up, and a few days later I noticed in a picture of one of the daily rallies, her husband, sitting on the steps, looking away from the cameras. According to what she told me at the party, her line of reasoning, that is, why they chose these 5 particular schools, consisted of their poor academics, and the fact that many of the students served lived in neighborhoods far removed from the school site — both of which rang to me as convenient excuses rather than thoroughly thought-out reasoning, given OUSD’s aggressive drive to charterization, the high levels of gentrification in the neighborhoods surrounding the schools in question, and the city of Oakland’s generally liberal and wrong-headed use of its limited funds. The former site of Lakeview Elementary will be the new home of OUSD’s administrative offices. Santa Fe has been auctioned off to Emeryville. At a town hall meeting about a month ago, the influential Coach Tapscott leveled the charge that the city wanted the buildings, literally wanted the brick and mortar real estate in order to make money off of them. Seems true enough. Of course, given the diminished population of children and families, Oakland probably does have too many schools — but it seems extremely unfair, and even suspicious which schools end up slated for closure. Rather than displace 1,300 kids at the stroke of a pen, why not roll back the “small schools” that were more recently opened? Could it be because they are charters? My elementary alma matter, Oakland Arts Magnets, was closed several years ago, ostensibly because of a re-orientation of priorities from the arts and music, which were used to buttress our education in maths and sciences and English, and in my opinion gave us all a pretty well-rounded education, given the perpetually high demands we inflicted on our over-worked teachers. What it comes down to is a question of priorities. Who are the indispensable ones, in the eyes of city leaders. Obviously, they are not the children of Oakland.

The sit-in itself started off quietly, relatively speaking. Arriving at the school at 4:30 on Friday, it seemed a scene familiar from my own childhood, the last hours of a school before summer break, when for some reason a slight surfeit of teachers and and children and attached adults seem to linger around as if reluctant to leave. In typical Occupy style, they held a barbecue in the back yard. The parents and teachers on the OO Ed committee set up their tents and began painting and dropping banners. The media was there in force, though when I watched it later that evening, the tone of this coverage had almost more a resigned than hopeful quality, as if this action were a slight poeticism rather than a militant resistance. When evening fell, Occupiers set up a sound system on the sidewalk, and engaged Grand Avenue in a manic dance party, booming Michael Jackson, the Coup and 2pac out into the up-scale Grand Lake District, catching a surfeit of supportive honks and quizzical looks, and even a slight degree of fear. When Occupiers are out in force, they are something to see. There’s anger and militancy even in their dancing. There’s the sense of fight in the very air, and potency to the very standing in the place you are standing. I am going to miss this feeling so much. I am going to miss them so very much. I wonder when we’ll all see each other again. Because I am certain that we will. We must.

The teachers though wouldn’t want the Occupiers to commandeer the event, and they packed up the sound system after about an hour and a half. Then, they told most of us to go home. This was a teacher-led action. This was a community-led action. Only those “directly affected” were to participate to the fullest extent. Lakeview Elementary was not to become an Oscar Grant Plaza. Not even a 19th and Telegraph. No, there was something in the very air telling all of us so. I would go back to this school again and again over the coming week, perhaps in the hope of influencing them otherwise. This was a real fight they had here, and I wanted to be a part of it. I believe that I was willing to get arrested for it. Why? It wasn’t even my fight. Maybe in part because it was Occupy’s fight. It was a part of the fight, a small, real example of the sickness in the system, one of the many reasons for the pain in my beloved Oakland. Thusly, I wanted more participation probably than my back-story justifies. But what fight could I make my own? I have no idea.