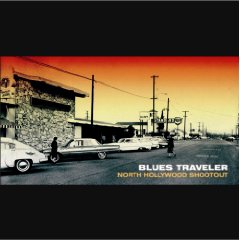 After over 20 years on the scene, Blues Traveler is no stranger to the album-release party. Listening to their latest effort, “North Hollywood Shootout” released on Verve Forecast, there’s no denying that the group knows what they’re doing. This album hits the shelves a year after “Cover Yourself” in which the group acoustically re-visited some of their older songs, and it seems that Blues Traveler has, once again, stylistically changed the trajectory that their previous album seemed to have plotted for them. And this time they seem to be retreating to more conservative grounds (a drastic shift indeed from the experimental Bastardos).

There’s nothing especially memorable about “North Hollywood Shootout.” Listening to it you could be surprised that long specialized in flashy instrumental jams, and once headlined a jazzy music festival alongside Phish. In fact the band seems to have made an effort to stick strictly to formula. Songs like “Forever Owed” and “Borrowed Time” seem to channel Dave Matthews more than Trey Anastasio. The notable exception is the jazz-rock track “Beacon,” which features a catchy guitar hook that brings you in, and an edgy John Popper harmonica solo that reminds you what can truly be done with the instrument when it’s in the right hands. I wish he’d done it more often.

You listen to “North Hollywood Shootout” and it’s over before you realize it was really on. The result isn’t unpleasant, it’s just nice. Shallow and nice. You can imagine the album playing quietly on loop in a Starbucks. Except for an odd insertion of spoken word poetry by Bruce Willis (yes, the same Bruce Willis better known for his heartfelt “yippee-ki-yay motherfuckers”) in the last track, Blues Traveler has probably released the most conventional album of their long career. Hopefully they won’t make a habit of it.

[This review originally produced for MyCrazyMusicBlog, and cannot be reproduced without permission. Thank you]