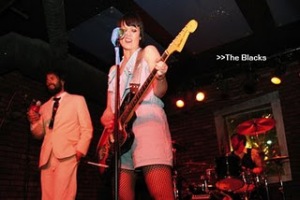 The Blacks, an NYC-San Francisco based indie group, played a short set at the trendy Club Harlot in San Francisco’s SOMA on November 5th, and basically rocked. Frankly I was surprised. With singer-guitarist Luisa Black, drummer Gavin Black and tambourinist-backup singer JDK Black, they’re a three-man band (well, two-man-one-woman) of dynamism and interest. Their sound is surprisingly full and dynamic, especially considering the extremely spare make-up of the band, lacking a bassist or keyboardist with a minor percussion instrument in their place. Visually the tambourinist is pretty unusual; JDK Blacks skips around the stage and takes full advantage of the freedom of movement few other instrumentalists would be allowed, but aurally too he makes a surprisingly important contribution in rhythmic punctuation and energy. I kept trying to imagine how they would sound without him. The drummer obviously has cymbals, which I’ve always assumed sound analogous to the tambourine. But really it wouldn’t be the same at all. With the tambourine helping out, The Blacks are one of those rare indie groups that you might actually want to dance too.

All three players are gifted instrumentalists; they make the most of what they bring, and the result is gritty, bare-bones rock, comprehensible and appealing at a gut-level. You wouldn’t think that a solo indie guitar would make for especially interesting melodic work, but Luisa Black makes it so, and the tunes to songs like “Elegant Walk” and “The Flame” are original and actually pretty catchy. It’s cool that The Blacks turn sparsity into an asset, and speaks to a solid understanding of their musical goals and capabilities. So much indie music focuses so hard on being different and weird; and The Blacks certainly are that. But their weirdness isn’t a forced attempt at uniqueness or non-conformity made to the detriment of their music (too often the case with garage-band types), but an artistic expression of what they know they can do. They’re great performers and fun to see. I highly recommend them.

[This review originally appeared on MyCrazyMusicBlog, and cannot be reproduced without permission. Thank you]