Impressions from May Day, Part 2: Brooms Collective Goes to the Mission District

There was this… (okay, i guess)

But as far as my own May Day Occupy experience, the most interesting was to come the following weekend. While I’ve been working, I’ve been living something of a double life, with my weekdays dominated by 9-5 office work, and my weekends by Occupy and the Occupy-related. It’s interesting having a foot in both worlds, but I think it’s important. We should be able to speak intelligently and calmly with those who disagree with us. We should remember that to a lot of people out there, in a lot of ways, we’re still speaking Greek (pun intended?). We should remain open to differing opinions, and we absolutely must keep a study eye on the temper of the community. We ignore it at our peril, which, I’m sorry to say, I believe we have done. In our diminishing levels of support, numbers, and expectations, we are now reaping the consequences.

As a case in point: the Mission District on the evening before May Day, when an evening march from Dolores Park, sponsored by Occupy Oakland, turned violent down a stretch of Valencia Street. A group of marchers, ostensibly Occupy Oakland members, smashed storefronts and the windows and windshields of parked cars, and they spray-painted anti-gentrification and anarchy symbols over any flat surface that could accommodate. During the next week, Wells Fargo donated $25,000 to a community fund to support the cleanup effort. The day following the Brooms Collective received this e-mail from a Mission District resident:

“I was a staunch supporter of the Occupy movement until this morning. This demonstrates the sad truth that history has repeatedly demonstrated: given a little power, the oppressed will become the oppressors. Affluent multinational thieves or mindless local vandals–not much of a choice, is it? I find them equally repugnant and I don’t want to live with either. Thanks for destroying not only a load of property but my own personal faith that anything in this world will ever change for the better.

Don’t bother emailing back to say Occupy Oakland bears no responsibility for this. You have lost all credibility so nothing you can say will make a difference. To anything.”

I couldn’t think of an adequate response. Because, if you ask me, she has a point. We can’t say we have no responsibility for what happened. Of course we do, and of course it’s wrong and she has every write to hate us for it. The prevailing wisdom, and my first knee jerk response to her anger, would be to divert the blame — I can’t imagine how the vandals were Occupy Oakland members, it’s just too crazy, too out of character. If you ask me, it’s a textbook case of the work of agent provocateurs, one to be remembered and catalogued and used for future reference. Here is one account by another Occupy blogger, in which he corroborates what I’ve heard elsewhere, that the vandals were unfamiliar faces, well-organized in their actions, and just a little too beefy and crew cut to convincingly pass as your average anarchist (though perhaps some of the regulars joined in as well, you can’t put anything past people). But in a movement as absolutely inclusive as Occupy, the risk of outside agitation should never be an excuse. We should never have had space that would allow something like this to happen in the first place. I understand the frustration in wanting to smash banks, but if we can’t even make the distinction between the property of the one percent and those of our fellow struggling citizens than I don’t know how we could ever hope to offer any kind of coherent solution to anything. 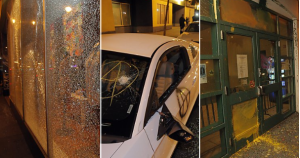 … and there was this

So, we the Brooms Collective, with our friendly and positive and community-minded sensibilities, took it upon ourselves to claim responsibility. After our weekly cleanup at the park on 32ndand San Pablo, we headed over to the Mission District. I’d only posted the event on OO’s website the evening before, so I wasn’t expecting us to get many. A few of our regulars had other obligations. One person met us at the 16th St. BART Station so, in the end, there were only four of us. But we put on our Brooms Collective T-Shirts (which my mom made during some of the GA’s — my mom is a pretty important part of this group, making for a, well, interesting dynamic), carried our brooms and our buckets, and started off down Valencia. Of course, most of the damage had already been done, and had already been cleaned up. We only found one circled Anarchy ‘A’ to clean off a wall. But we made our concern felt. We went into the restaurants and asked the managers if they’d been affected, and if there was anything we could do to help. We expressed our concern, and we gave them our e-mail,brooms@occupyoakland.org, in case anything like this ever happened again. Most of them thanked us. Some of them did not. Generally, I felt little anger from any one, mostly bemusement and even thankfulness. There was a degree of understanding and acceptance, as if this sort of thing was but yet another of the times’ many crosses to bear, that you can’t help for a few stray whackos (because that is how many people see us, I’m coming to realize). I don’t know, if you ask me we can do better than that. We do have a message, and we do have a purpose, and if we act with just a little more direction and sensitivity and self-control we could reach, and speak for, a far greater slice of society than we are right now. Thanks to events such as those in the Mission District, and a general environment of hostility to conflicting opinions, we risk falling into irrelevance. We risk becoming a fringe group, easily isolated from a populace that fervently wishes that they could support us, and which, in the end, is our only hope for protection from a state which will otherwise systematically intimidate, arrest, discredit and destroy the few hard core who remain. This process has already begun. It would be a huge tragedy if we proved unable to do something about it.