Occupy Oakland’s Shifting Winds, and My Transition from Attendee to Organizer 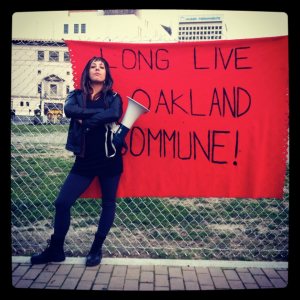 Since January 28th, with the mass arrests, the street battles with the police, and the vandalism of City Hall, there seems to have been something of a wind change within Occupy Oakland. While no one is going so far as to apologize for taking the action, those of us within the Move-In Committee do seem a little bit chastened. Despite the threat for retaliatory action, proclaimed in a press release from which many have since distanced themselves, we will not be attempting another action in the same vein. In a quiet, and somewhat dejected meeting earlier today, we agreed to suspend the committee until further notice. Or until somebody comes up with a better idea.

OO has long been criticized for its tactics, its unashamed radicalism, and its militancy. Its refusal to accommodate the police in any form, or to take any statement by the mayor or the city council or the mainstream media, local and national, at face value. But the internal criticism finally became to strong to ignore, perhaps best evidenced by the formation of a Non-Violence Caucus, which meets weekly to discuss non-violent resistance. People with signs proclaiming “stop the vandalism” began to appear at our GA’s. And then there’s Stand For Oakland, an anti-OO group that held its first rally last weekend, counter to an OO rally occurring at the same time — police in riot gear, not to miss a chance to posture in front of the heavy media coverage, stormed our rally and confiscated our sound equipment, a first — we have used this equipment at each one of our GA’s, unlicensed, for as long as I have been attending.

I for one, particularly after my arrest on January 28th, which I strongly believe to have been unjust, have grown less and less patient with the constant argument surrounding “diversity of tactics.” It has become harder and harder for me to see property damage as violence. I have found myself agreeing, more and more vociferously, with the sentiment that the police are the only ones committing any real acts of violence. This despite the article by Chris Hedges, a well-respected intellectual ally of the Occupy movement, calling the Black Bloc a “Cancer in Occupy.” Among other things, Hedges posits that the anarchists who make up the Black Bloc are against all “liberals” who do not think like them, and are in it only for thrills and infantilistic re-masculanisation. Problematic, writes one rebuttal, because the Black Bloc, like Occupy, is not a monolithic organization, with leaders and edicts and due-paying members, but rather a collection of people who engage in certain tactics, in their case, targeted property destruction and physical resistance to the police. Their politics, like their movement and tactics, vary with each and every person who chooses to dress in black and wear a black bandana across his or her face. The “Fuck the Police” marches still taking place every Saturday are not associated with the Black Bloc in any way, and are, in my increasingly radical opinion, useful in highlighting the real and justified anger within OO at the OPD, whose repression is consistent, direct, and effective, and is not likely to let up until Occupy Oakland has been subdued and crushed.

And yet, despite mine and my comrades anger and frustration, there has been an increase in soul searching, in recognizing the necessity of engaging a community that does in fact seem to be losing patience with us, within which many wonder how we could have expected any different on January 28th. I for one am glad that we took the action. I am glad I participated. Maybe I’m even glad that I got arrested. I got to witness what we were up against first hand. Now I know. And since that weekend, the energy in OO has indeed returned, for people on both sides of the diversity of tactics vs. non-violence debate. It’s back to that old feeling, just after the General Strike in November 2nd — again, events and actions and meetings are moving so fast and constant that if you miss a day you miss a world. There seems a greater awareness of the many differing opinions about us in this city, which we claim as our own, yet with which many of us are so unfamiliar. And while many Oaklanders may support our philosophy, far fewer will involve themselves or their families in actions that carry the risk of harm or arrest or tear-gas. Not to say that they don’t appreciate those of us who will.

It has come time for Occupy Oakland to become a welcoming movement. A place that offers support, and requests it. This does not mean we have to lose our radicalism, we just have to compliment it. I believe that there are a few ways that we could go about doing so, and one potentially important one is through regularly scheduling a series of simple, worthwhile community service projects: neighborhood clean-ups, tutoring services, the offering of free food and basic medical care. In this spirit, and because nobody else was doing it, I decided to spearhead the formation of the Occupy Brooms Collective. Still little more than an idea and an e-mail list, my personal vision, which I will surely have to sacrifice if or when our ranks increase, is of a regularly scheduled series of small scale actions in which Occupy Oakland members, wearing recognizable light blue Occupy vests (light blue being the unofficial “color” of the movement), participate in street cleaning and neighborhood beautification projects throughout the city, in conjunction with supporters, community organizations, and area residents. This can allow us a positive outlet for our energy, and it will force us away from Oscar Grant Plaza. It will take many OO’ers out into a city that could greatly benefit from our presence, and whose support could benefit us in return. It will force us to engage with community members and it will force us to argue with them. We will see that it really isn’t as simple as us vs. the 1%. We will give OO a human face, and we will counter-act the media narrative characterizing us as nihilistic hooligans and thrill seekers. After all, there’s nothing more thrilling than sweeping a sidewalk.

I’ve announced my plan at a few GA’s, collected some e-mails, and started the discussion. The first dilemma: should we request funds from the GA, which is notoriously stingy, or rely on donations and spare parts alone? We shall see. Hopefully we’ll have our first action this weekend, and then another the weekend after that. As a part of my organizing efforts, I’ll have to step up my participation: in addition to the GA’s, I’ll begin attending meetings of Occupy the Hood, and the Community Outreach Collective, two very interesting groups engaging in some very interesting efforts. And of course, I’ll continue to write about all of it as I go.